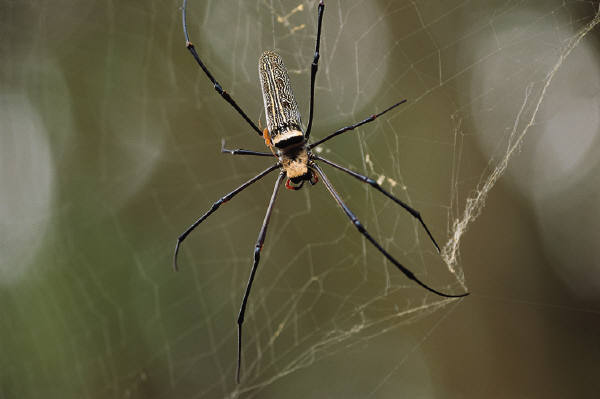 In summer, countless spiders dot my front and back yards. They look like little Christmas ornaments hanging from tiny invisible hooks, and they cast miniature, blurred shadows against the walls behind them when the morning sun hits them just right.

Last week, a particularly plucky spider stood guard at my front porch. She was there every morning as I opened the door to pick up my newspapers. She seemed to taunt me, knowing full well, as spiders do, that we humans hate to pass through a spider web. Reluctantly, I dismantled her miraculous (how in the heck do they DO that?) all-night construction wondering if it was her dream home. Mostly I felt regret knowing it was her source of breakfast, or at least an early lunch.

I was pleased to note that she was able to learn, at an ever so rudimentary level, as the week wore on. Every morning for the first three mornings, I broke her landlines and disturbed her semi-sleep. After I broke the line, she would scamper to the safety of the nearby bush, mumbling an arachnid epithet under her breath. Finally on the fourth day, she heard my front door open and scuttled to the bush before I broke her bracing line.

I told Mrs. Spider she could spin her meal-trap elsewhere, but she was not as sharp as her ancestor Charlotte of Charlotte’s Web. Stubborn yes, smart, no.

A few days ago, I opened the door to reassert my human superiority when I saw she was gone. Had she learned the final lesson—that this was not a good place to build? Or had she gone to that big spider web in the sky?

At first I thought that summer spider season might be over. Nope. We still have webs aplenty everywhere else. Hopefully she’s just found another spot, having learned the mantra of real estate in a relatively painless way. Location. Location. Location.